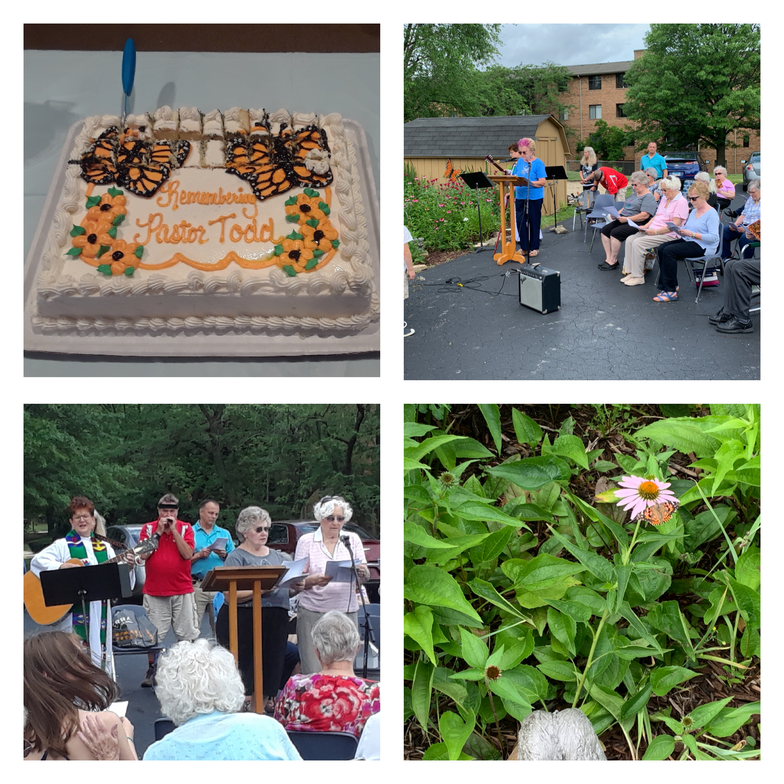 Sunday, June 27, 54 people gathered to remember Pastor Todd a year after his death.  Year anniversary observances are an ancient tradition in the church and Lord of Life’s gathering was truly a worthy example.  The event was held at the pollinator garden, and featured singing, scripture, prayers, and reflections by Todd’s brother, Matt and the release of butterflies!  The metal image of Pastor Todd that has hung in the narthex this past year was presented to Todd’s mother.  Following the final song, Inch by Inch, the crowd gathered in the Narthex for cake and lemonade served by the Hospitality Committee.

We give thanks for Todd’s memory at Lord of Life.  Todd was a man who inspired care for the environment.  He came to Lord of Life after a time of controversy and sought to generate trust and peace among the congregation.  With guitar in hand and a song in his heart, he generously lived among us until illness made it impossible.  His love for Lord of Life never failed, and God never let him down.

A great big thank you to everyone who made this observance such a caring event: ·

Following this one-year observance, Aimee Jimenez and Marilynn Sells will transfer the items on the memory board to a scrapbook.  If you placed something on the board and would like it returned please contact Aimee or Marilynn.

Subscribe to receive email updates with the latest news.